The use of GPS in automotive testing is now well established, and Racelogic has been a market leader and innovator for over a decade. GPS systems have revolutionised the accuracy and convenience of testing, development, and validation within the industry. Why and how is it so effective?

There is a common misconception that speed measured via GPS is done so as a function of position against time. If this were the case, GPS velocity would be just about unusable, because GPS position relies on precise measurements of the distance from the receiver to the satellite, and therefore suffers from numerous effects - such as atmospheric interference - which delays the signal.

Fortunately, velocity isn't measured like this: instead, the Doppler shift in the signals coming from the satellites is captured and this leads to an incredibly accurate measurement of speed.

If you are tracking seven satellites, then this is like having seven police radar guns aimed at you: the measurement is made by taking them all into account.

GPS satellites are equipped with an atomic clock, which ensures timing stability to less than one-millionth of a second. By integrating Doppler-derived speed with this level of time signal reliability, an extraordinarily accurate distance measurement is achieved.

There are a number of tests which we have carried out over the years to verify and improve our measurement algorithms for applications in vehicle testing.

One such test is to place two reflective strips on the road at a known distance apart. Using a laser sensor connected to the trigger input of a VBOX, the vehicle is then driven between these two points a number of times, and the distances compared. In such tests, the VBOX 3i will always be within 3cm in 1000m, which is about the same as the measurement uncertainty due to the slight deviation of the vehicle during the driving.

GPS positional accuracy is subject to ionospheric interference, which causes a satellite signal to change in length as it travels towards the Earth's surface. This means that, depending on the quality of the receiver, accuracy can vary by several metres.

VBOX data loggers are fitted with superior GPS engines that give better positional accuracy than those found in mobile phones and satellite navigation devices. By using additional signals other than those from the standard US GPS satellites, this can be enhanced further. The free SBAS services augment the positional capabilities of a survey-grade receiver to as good as 1m without the use of a Base Station.

However, by adding another GPS engine at a fixed position, the majority of errors can be calculated and removed from the final result. This is the function of a Base Station: because it remains stationary, it is able to broadcast correction messages to a roving VBOX, resulting in much improved positional accuracy.

By incorporating signals from the Russian GLONASS satellite constellation and employing a Real-Time Kinematic (RTK) algorithm, the VBOX 3i Dual Antenna RTK with suitable Base Station achieves a positional accuracy of +/-2cm. 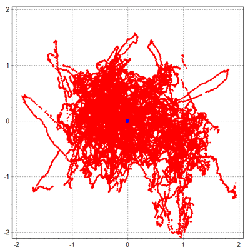 The image on the left shows a scatter plot of samples taken over a period of 24 hours demonstrates just how accurate the RTK + GLONASS really is:
Normal GPS in red, RTK in blue.

The advantage of using both sets of constellations is that there are almost twice as many measurements available to use, and they are on two slightly different frequencies. This allows sophisticated algorithms inside the GPS engines to eliminate all of the major errors normally associated with position estimation, leading to the highest accuracy GPS engine on the market today.

See this video for a demonstration. [Signing my name... including inappropriate Rolf Harris comment.]

Relative Position – the Moving Base Solution

In the field of automotive testing, and especially that of ADAS development, knowing the distance between moving vehicles is often a requirement. This can be achieved on a test track by using multiple VBOX units and a Base Station, but the area over which testing can be conducted is determined by the range of the telemetry modems that broadcast correction messages.

What is needed in this situation is high relative positional accuracy (the distance between subject and target vehicles, as opposed to the actual position of them on the face of the Earth) so by configuring one of a pair of VBOX 3i Dual Antenna with RTK units with a special version of firmware, Moving Base now allows for applications such as Forward Collision Warning, Adaptive Cruise Control, Blind Spot Detection, and Emergency Braking to be tested and validated in the environment in which they will actually be put to use – amongst other road users and roadside objects. This not only ensures total realism, but also has the potential to shorten development timescales and offers a level of convenience not previously available to test departments.

By employing multi antenna systems, it becomes possible to measure vehicle body attitude parameters. When placed in line down the length of the vehicle roof, a dual antenna setup can be used to capture slip angle and pitch; when placed across the width of the roof it can record roll.

This works by configuring the VBOX with the antenna separation distances, and with an RTK lock operating between them, a very accurate angle measurement is produced, achieved by comparing the heading taken from the primary antenna against the relative position of the others.

Multi antenna VBOX data loggers are used not just in the automotive sector but also in Marine applications, where they are perfect for measuring trim, heel, and lee of the vessel.

The number of samples produced each second is of primary importance in vehicle testing. The most usual update rate for GPS is once a second, which is fine for navigation, but it is not much use if you are trying to measure speed, braking distance, acceleration, lap-time or track position. The minimum for these sorts of tests is 5Hz to see any level of detail, and 20Hz is normally considered the minimum entry point for a decent GPS vehicle testing solution. The top end GPS systems can update 100 times a second, and these are suitable for specialized applications such as brake testing and high speed dynamic manoeuvres.

This is the delay between the change in vehicle motion, and the output from the GPS changing, and is completely different from the frequency response. The latency is only important if you are measuring other parameters at the same time, or if you want to use the output of the GPS engine to control something.

This is how fast the velocity measurement can react to a change in vehicle motion, for example, during the onset of an ABS assisted stop, the rate of change of acceleration (jerk rate) is very high, and to measure distance and speed accurately, the GPS has to be able to track these changes very accurately.

To show an example, here are three brake stops which were carried out using a low, medium and high frequency response setting on the GPS engine. The blue trace is the reference (IMU corrected) vehicle speed, and the red trace is the GPS measured speed. You can see as the frequency response gets higher, the over/undershoot of the velocity gets smaller. 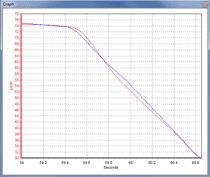 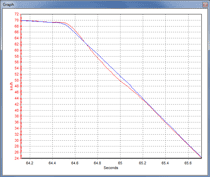 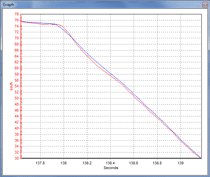 The faster you sample the velocity, the more noise will appear on the signal. There is a very careful balance between filtering the velocity to remove noise, and introducing a poor frequency response. By incorporating an IMU and Kalman filter, you get the best of both worlds, an improved frequency response with less noise.

The standard type of GPS engine used in Sat Nav devices and Mobile Phones is very small and very cheap. Coupled with a very simple and small antenna, these devices update their speed and position once a second and have an accuracy of around 3-5m 95% CEP. However, even at this low end of the market, the velocity is usually still fairly accurate at around 0.2-0.5 km/h. Whilst an update rate of once a second (1Hz) is not enough for any kind of high speed vehicle analysis, we have optimized the settings in one of the best commercial grade receivers to output data at 10Hz.

Survey grade GPS engines use much higher quality components than commercial GPS engines, employ very powerful processors and use patented techniques to get higher positional accuracy and high speed updates. They are a lot larger than the commercially available GPS engines, and can cost up to 100 times more. 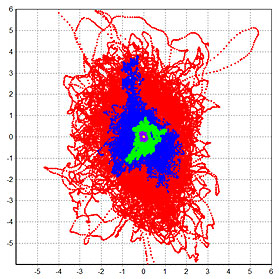 The 24hr position scatter plot on the left shows a commercial engine in red, an un-aided survey grade in blue, aided by SBAS corrections in green, aided by a 20cm base station in purple, and you can just make out an RTK 2cm aided system in yellow!

You may ask what is special about the GPS engines we use in our VBOX products? The answer is that we have not only selected the best GPS engines for different products, but we have also worked with the manufacturers of these GPS engines to optimize them for our particular requirements, so you can be sure that you are getting the very best performance that is available.