For those who need a high accuracy speed signal to augment an existing testing setup, the VBOX Speed Sensors connect via CAN, digital, or analogue interface to your own data logging equipment at between 5Hz and 100Hz. All Speed Sensors feature an IP66 billet aluminium enclosure and Deutsch motor sport style connector, and represent the ideal solution for those that require speed, position, braking distance, or acceleration data without the need for internal logging.

All Speed Sensors are compatible with our DGPS Base Station for increased positional accuracy, and the dual antenna variant adds slip and pitch/roll output at 100Hz. 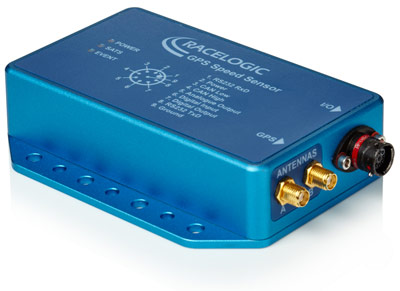 The Speed Sensor Dual Antenna (VBSS100SL) is a 100Hz GPS/GLONASS system, which combines high level accuracy and test repeatability with the ability to measure slip and pitch/roll angles at 100Hz.

The VBSS100SL can be used for non-contact sensing of velocity providing signal output data on CAN, analogue and digital, allowing easy integration with data loggers and testing applications. 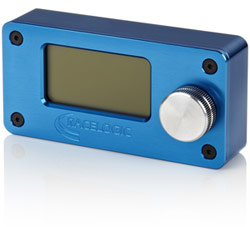 With only 13cm in length, the 100Hz speed sensor is easy to mount and transport, making it ideal for automotive testing, motorsport, marine, and telematics.

The VBSS100SL comes with VBOX Manager, a display which enables the user to setup the dual antenna separation, change the dynamic modes, level and align the antennas.

The VBOX Speed Sensor Dual Antenna has a host of features which makes it a very powerful and flexible vehicle testing equipment.

With a length of only 13 cm the unit is easy to mount and transport, making the Speed Sensor perfect for automotive testing, motorsport, marine, and telematics. 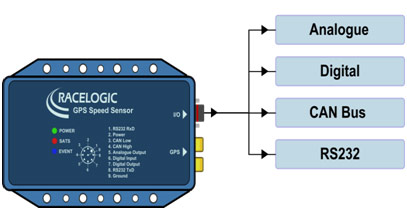 2x GPS Antennas
By utilising two GPS engines configured in a 'fixed baseline RTK setup', true heading, yaw rate, lateral and longitudinal velocity, slip angle and pitch angle can be measured, (slip is measured at the point at which you place the main reference antenna. This can be translated to any point on the vehicle in post processing).

Definitions
* 95% Circle of Error Probable (CEP) = 95% of the time the position readings will fall within a circle of the stated radius. 2cm accuracy requires an RTK option and RTK enabled Base Station.
** Based on <50m brake stop distance. 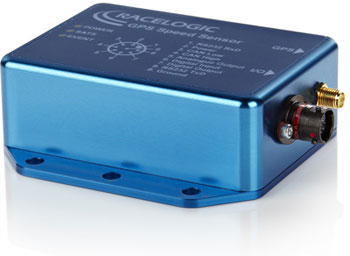 Units from 10 Hz update rate are also compatible with the DGPS Base Station for increased positional accuracy.

The 100 Hz Speed Sensor features a GPS engine that tracks the Russian GLONASS range of navigation satellites as well as the normal GPS constellation, using almost twice as many measurements for accurate results and reception in areas of poor satellite visibility. Read more on VBOX GPS accuracy.

If you need to measure speed, position or acceleration, but have no need for internal logging, then the VBOX GPS Speed Sensor range is ideal.

VBOX Speed Sensors are smaller, cheaper and more rugged than the equivalent VBOX range of data loggers, with the same accuracy and quality of signal.

They are designed to integrate directly with your own logging equipment via a CAN or serial interface.

All units are housed in the same small, water resistant package with connections made via a Deutsch motorsport style connector.

The VBOX Speed Sensor Single Antenna has a host of features which makes it a very powerful and flexible item of vehicle testing equipment.

With a length of only 9-14 cm the unit is easy to mount and transport, making the Speed Sensor perfect for automotive testing, motorsport, marine, and telematics.

The specifications below refer to all four VBOX Speed Sensor versions. Whenever values differ from unit to unit, they will be stated from smallest to highest update rate: RLVBSS05| RLVBSS10| RLVBSS20| RLVBSS100.

Definitions
* 95% Circle of Error Probable (CEP) = 95% of the time the position readings will fall within a circle of the stated radius. 2cm accuracy requires an RTK option and RTK enabled Base Station.
** Not using DGPS and crossing the start/finish line at 100km/h.
*** Based on <50m brake stop distance. 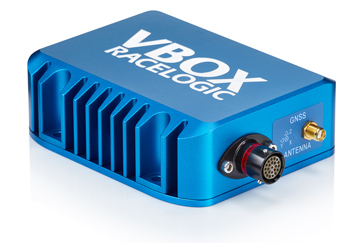 The VBOX 3iS (RLVB3iS) is a compact GPS/Inertial sensor which offers extraordinary precision and accuracy, by combining wheel speed data with a high-grade Inertial Measurement Unit and 100 Hz RTK GNSS receiver.

In areas with limited or no satellite signal (such as tunnels or test tracks surrounded by trees), the VBOX 3iS can fill in the gaps for prolonged periods of time – allowing you to continue testing without having to worry about erroneous data. 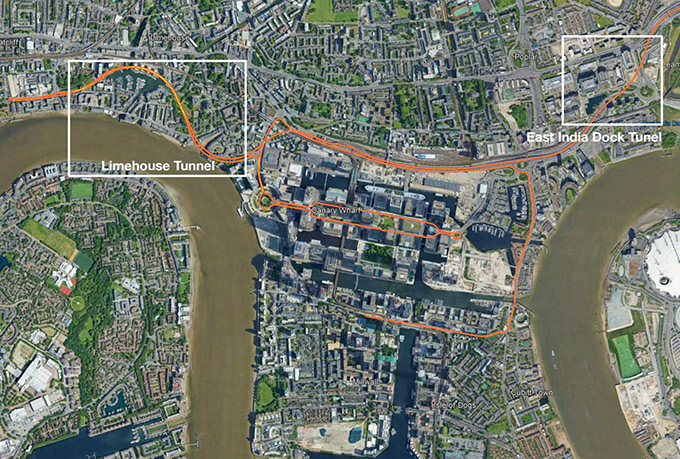 Designed to be used with your existing control system or data logger, the VBOX 3iS offers accurate acceleration, speed, position and attitude data. It is designed for conducting tests such as performance, braking, ADAS and benchmarking. 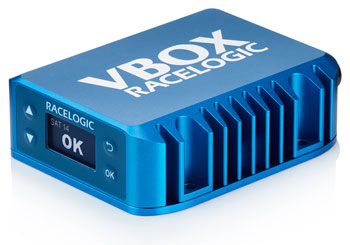 For ADAS applications, connecting to another VBOX 3i RTK device enables the VBOX 3iS to act as a moving target and with RTK enabled, is capable of achieving 2 cm accuracy.

Thanks to a 100 Hz multi-constellation GNSS engine and the tracking of both the GPS and GLONASS networks of satellites, the VBOX 3iS ensures the accuracy of the data being captured even in restricted sky view conditions.

In GPS denied environments, such as tunnels and deep urban canyons, combining wheel speed information with the GNSS and inertial data makes a huge improvement to the accuracy of the estimated speed and position.

In this situation, the VBOX 3iS removes the need to fit expensive external wheel speed sensors that are difficult to fit and vulnerable to damage, by using the existing CAN bus information from the vehicle. Thanks to our comprehensive Vehicle CAN database, this is quick and easy to do as you can simply download the CAN file for each vehicle you are testing.

As the VBOX 3iS has an internal IMU that is used for GNSS/IMU integration, the unit needs to be mounted securely to ensure optimum performance.

You can easily mount the VBOX 3iS inside a vehicle using our bespoke mounting kit. Consisting of a bracket (RLACS291) that simply attaches to the VBOX IMU mounting prop (RLACS212-V2), the solution fits many vehicle types without modification and can be installed and removed very quickly. We recommend that the VBOX 3iS is mounted vertically, towards the bottom of the pole.

Using the latest multi-frequency, multi-constellation GNSS receivers and integrating inertial and vehicle speed data is making up for the limitations of the test track

It can be exciting and also daunting working in an industry where technological progress seems to be increasing at an exponential rate. New techniques and faster ways of obtaining better results seem to be coming thick and fast. One such example of explosive growth is in global navigation satellite systems (GNSS), an area that we can no longer refer to as GPS, given that there are now four major constellations contributing to a more accurate and reliable navigation solution.

Galileo, the latest EU component in this infrastructure, has been a long time coming, but it looks like it was worth the wait. The Galileo program has benefited from improvements in satellite ranging techniques since GPS first came on the scene, with stronger, more robust signals improving reception and providing higher fidelity.

Rapid advancement in microprocessor power has enabled receivers to handle multiple constellations on several frequencies at high update rates, while processing inertial sensors and using vehicle wheel speed data. The key to the improved tracking and accuracy is not just down to the number and quality of the signals now present, but also to the availability of multiple frequencies.

All GNSS satellites now transmit on more than one frequency, enabling elimination of the errors caused by ionospheric effects (one of the major sources of positional error) by simultaneously processing at least two range measurements.

For the automotive test engineer, GNSS measurement of speed, position and acceleration has become an essential part of the process in assessing the performance of many aspects of a vehicle. Test tracks are rarely perfect places for satellite reception, with trees, bridges and tunnels all having an effect on the quality of the measured data.

When the tests are carried out on the road, this problem becomes even greater, with more objects obscuring the direct view to the satellites. However, this limitation is rapidly disappearing, brought about by using the latest multi-frequency, multi-constellation GNSS receivers and integrating inertial and vehicle speed data.

As an example of the extraordinary precision that can now be obtained in places where you would previously struggle to get any satellite lock at all, Racelogic carried out a test down a very narrow street, with buildings on either side and an overhanging roof. By using multiple frequencies on the GPS, GLONASS, Beidou and Galileo constellations, an astounding accuracy of 2cm (0.8in) was obtained without using any other sensors.

The vehicle path was so accurate that testers could clearly see on which side of the road the car was traveling, and the measured path follows almost the same line on both passes.

This accuracy was obtained through a combination of tracking up to 26 satellites and using two frequencies on each of the four constellations. 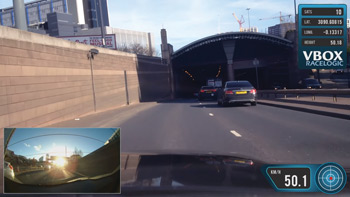 An added advantage of using multi-frequency techniques is the time taken to recover centimeter-level accuracy after a bridge or tunnel is often less than two seconds. Furthermore, in areas where there is no view of the sky at all, such as in tunnels, inertial sensors and wheel speeds can fill in the gaps for periods of up to five minutes. Racelogic carried out a test in the 400m-long (1,312ft) East India Dock Tunnel in London. 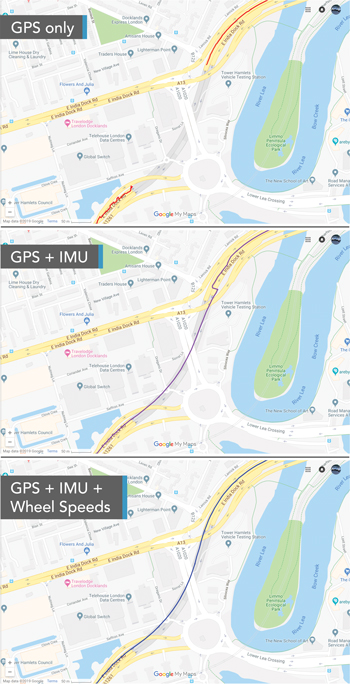 The resulting data clearly showed the difference that the inertial and wheel speed data is making to the accuracy of the estimated trajectory, with the inertial measurement unit (IMU) doing a good job of estimating the position in the tunnel, ending up with a 15m (49ft) error at the end.

Adding the wheel speeds into the system considerably reduces the errors, tracking the vehicle through the tunnel with great accuracy.

The wheel speed information certainly makes a huge difference to the data when there is no visibility of satellites, so the question is, how do you obtain this data from the vehicle in the first place?

You could fit external wheel speed sensors to the vehicle, preferably one on either rear wheel, but they are expensive, difficult to fit and vulnerable to damage.

The best solution is to use the sensors already fitted to the vehicle by connecting to the CAN bus.

Over the past 20 years, Racelogic has built a comprehensive database of CAN protocols, enabling customers to connect directly to the vehicle’s bus and to use the wheel speed information, drastically improving the measurement accuracy in difficult conditions.

Racelogic’s new VB3iS product has the latest multi-constellation, multi-frequency GNSS engine, with an internal, high-grade IMU and the ability to use CAN wheel speed information. With all these tricks up its sleeve, the VB3iS achieves centimeter-level precision in environments previously off-limits to GPS-based systems. The VB3iS is designed for ADAS testing, steering robots and autonomous testing.

These tutorials are designed to introduce you to VBOX 3iS and guide you through the different functionalities and features. 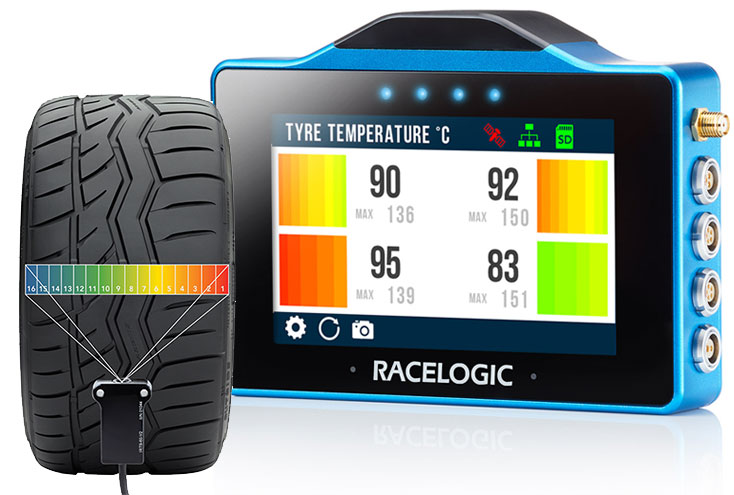 The RACELOGIC Tyre Temperature Monitoring System (RLVBTTMS) has been specifically designed to measure, log and display surface temperature of a tyre, providing invaluable information to the test driver whilst on track.

The display shows the whole surface temperature for all four tyres via 64 individual heat maps, as well as live temperature and maximum temperature values.

Each sensor can measure up to 16 temperature points on an object with surface temperatures ranging from -20° C to 300° C.

The tyre temperature sensors can also be used without the VBOX Touch (RLACS272). In this case the data can be recorded using a VBOX Video HD2 and the heat maps overlaid in real-time on the video. As this information is available on the video, it is extremely easy to interpret and see exactly what is happening on the test track. 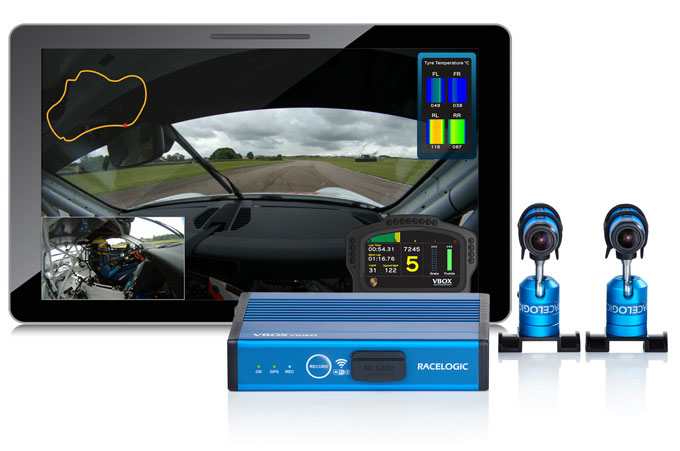 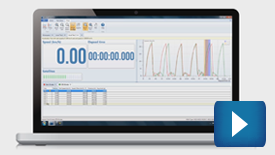 VBOX Test Suite
The next generation of data analysis software